At an independent side event of the UN Food Systems Summit 2021, on 24 September the Transformative Partnership Platform on Agroecology (TPP) has launched a new Million Voices initiative: citizen science to support agroecological transitions to help accelerate global efforts to redesign the current food system.

A one-hour virtual session saw over 300 registrations and an extensive Q&A section, in which event’s attendees were given an opportunity to indicate what, in their opinion, should be a priority for the initiative’s implementation phase.

In his opening remark, Michel Evequoz, Senior Advisor at the Swiss Agency for Development and Co-operation (SDC) rightly underlined that:

“Agroecology has emerged as one of the most promising solutions to the problems of our food systems, and now, a broad coalition of actors is forming and gaining momentum.”

The building of the momentum is reflected by the Coalition for Food Systems Transformation through Agroecology, which has been signed by 19 countries and nearly 30 organizations, including those of the United Nations (UNDP, UNEP, WFP and IFAD), regional and national farmers organizations (AFA, ROPPA, etc.) and research organizations (CIFOR-ICRAF, CIRAD, etc.), among others.

Michel Evenquoz also highlighted the fact that, in its essence, agroecology is based on inclusiveness and empowerment:

“Agroecology is a movement, a set of practices, but also a scientific discipline. In all these aspects, agroecology is a dynamic, inclusive, transformative power to change the food systems.”

The event’s moderator, Fergus Sinclair, Chief Scientist at CIFOR-ICRAF and co-convenor of the TPP on Agroecology, touched on the two important aspects of citizen science, namely the extent to which science is responsive to the concerns and needs of citizens; and the extent to which citizens are involved in providing information, which generates scientific knowledge. Both of these aspects should always be considered when designing and implementing any citizen-centric campaigns.

One interesting example of citizen science approaches already being used in agroecology was given by Tor Gunar Vagen, Head of CIFOR-ICRAF Spatial Data Science and Learning Lab. Called the Regreening Africa App, the assisted crowd-sourcing tool for tracking land restoration at scale allows for data gathering on a number and species of trees being planted as well as their precise location. It also helps to monitor the survival rate of those trees, therefore making it an extremely powerful tool to actually measure progress.

Speaking of data, Anna-Verena Nosthoff and Felix Maschewski from the Data Politics Lab at the Humboldt University of Berlin shared a critical perspective on big data and big tech platforms and addressed the need for data alternatives, such as open-source technologies.

“The concentration of power is problematic. Not only because the marketplace owned by a single company enables that company to set standards, define code of conduct and control the barriers to market entry, but also because it can then dictate who will be able to act on that market, when and under what conditions. A single company can also create proprietary forms of knowledge,” – pointed out Felix Maschewski.

In the event’s final section, attendees shared their views on those aspects of agroecology that the Million Voices initiative should address - the words ‘soil’ and ‘co-creation’ were the most prevalent. 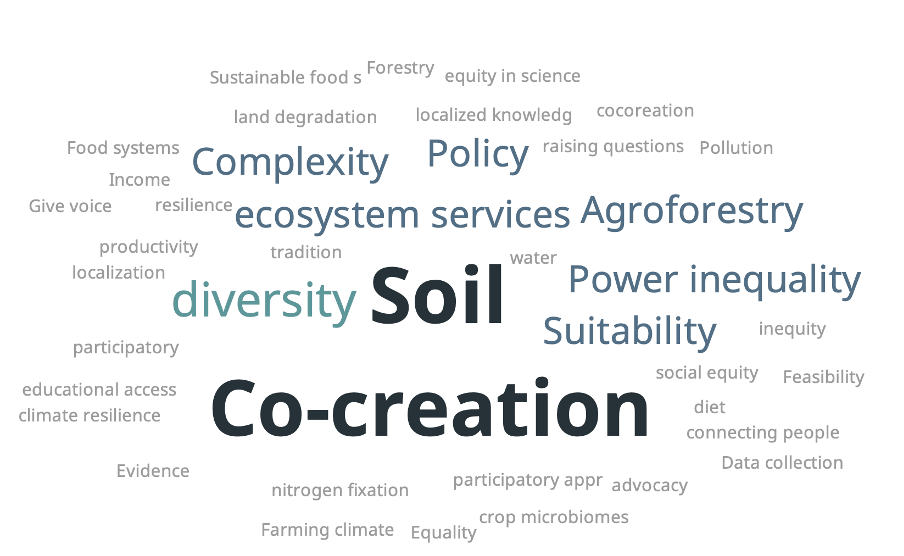 When asked what is more important: citizens doing the science and collecting the data or citizens’ concerns and needs being considered by scientists, the dominant 53% of respondents chose the latter, while the remaining 47% went for the first option. With the audience split in half, the importance of collaboration, inclusivity and empowerment is ever more evident, all of which, as noted by Michel Evenquoz in the event’s opening section, can be tackled by the agroecological transition.

Through a series of open-ended questions, the event’s participants could also indicate some of the challenges and opportunities that they see in citizen science more broadly. The responses received are of great value and include comments such as ‘capacity building of farmers’; ‘giving a voice to disadvantaged people’; and ‘strengthening and further connecting the agroecological movement.’ When it comes to challenges, respondents highlighted the difficulties with ‘using platforms that do not co-opt farmers’ data for private interests’; ‘exclusion of underrepresented groups due to literacy issues’; ‘imbalance in the relationship between citizens and science’ as well as ‘homogenised collection of data’.

Over the next months, a series of national and regional events will follow to consolidate the focus of the initiative and then put citizen science into action in support of agroecological transformation.

Or
If you have linked your account to one of the following social networks, please click on the relevant icon to log in
Not a member yet?
Join